What is Friedreich's ataxia?

Friedreich's Ataxia (also called FA or FRDA) is a rare inherited disease that causes nervous system damage and movement problems. It usually begins in childhood and leads to impaired muscle coordination (Ataxia) that worsens over time. The disorder is named after Nicholaus Friedreich, a German doctor who first described the condition in the 1860s.

In Friedreich's Ataxia the spinal cord and peripheral nerves degenerate, becoming thinner. The cerebellum, part of the brain that coordinates balance and movement, also degenerates to a lesser extent. This damage results in awkward, unsteady movements and impaired sensory functions. The disorder also causes problems in the heart and spine, and some people with the condition develop diabetes. The disorder does not affect thinking and reasoning abilities (cognitive functions).
Friedreich's Ataxia is caused by a defect (mutation) in a gene labeled FXN. The disorder is recessive, meaning it occurs only in someone who inherits two defective copies of the gene, one from each parent. Although rare, Friedreich's Ataxia is the most common form of hereditary ataxia, affecting about 1 in every 50,000 people in the United States, Both male and female children can inherit the disorder or you an say among 1 Million people only 10 person may have ATAXIA and in

PAKISTAN by my search from last 5 year I only got figures near about 35-45 (till 06-09-15), in which more are females, I would like to appeal all Doctors, Parent and Patient that they contact me without any hesitation  and registered free their name for Awareness Help, Medical Research, Medications, etc to Defeat this rare Genetic diseases. More things you can find all in my Booklet download PDF free Click here for Friedreich Ataxia and  Click here for Ataxia  or just call or SMS (0345-5882293) and email (binadamfoundation@yahoo.com) me to get Book let free of Cost in Pakistan.

What are the signs and symptoms?

Symptoms typically begin between the ages of 5 and 15 years, although they sometimes appear in adulthood and on rare occasions as late as age 75. The first symptom to appear is usually gait ataxia, or difficulty walking. The ataxia gradually worsens and slowly spreads to the arms and the trunk. There is often loss of sensation in the extremities, which may spread to other parts of the body. Other features include loss of tendon reflexes, especially in the knees and ankles. Most people with Friedreich's Ataxia develop scoliosis (a curving of the spine to one side), which often requires surgical intervention for treatment.

Dysarthria (slowness and slurring of speech) develops and can get progressively worse. Many individuals with later stages of Friedreich's Ataxia develop hearing and vision loss.

Other symptoms that may occur include chest pain, shortness of breath, and heart palpitations. These symptoms are the result of various forms of heart disease that often accompany Friedreich's ataxia, such as Hypertrophic Cardiomyopathy (enlargement of the heart), myocardial fibrosis (formation of fiber-like material in the muscles of the heart), and cardiac failure. Heart rhythm abnormalities such as tachycardia (fast heart rate) and heart block (impaired conduction of cardiac impulses within the heart) are also common.

About 20 percent of people with Friedreich's ataxia develop carbohydrate intolerance and 10 percent develop diabetes. Most individuals with Friedreich's Ataxia tire very easily and find that they require more rest and take a longer time to recover from common illnesses such as colds and flu.

The rate of progression varies from person to person. Generally, within 10 to 20 years after the appearance of the first symptoms, the person is confined to a wheelchair, and in later stages of the disease individuals may become completely incapacitated.

Friedreich's Ataxia can shorten life expectancy, Sleepiness is the most common factor in Ataxia and Physiological Mood disorder, Depression, Bi-Polar Disorders are much problem (Dr Rizwan Taj, Physc Aftab Hussain, Haji Babar) and heart disease is the most common cause of death. However, some people with less severe features of Friedreich's ataxia live into their sixties, seventies, or older.

How is Friedreich's ataxia diagnosed?

A diagnosis of Friedreich's Ataxia requires a careful clinical examination, which includes a medical history and a thorough physical exam, in particular looking for balance difficulty, loss of Proprioception (joint sensation), absence of reflexes, and signs of neurological problems. Genetic testing now provides a conclusive diagnosis. Other tests that may aid in the diagnosis or management of the disorder include:

How is Friedreich's ataxia inherited?

Friedreich's Ataxia is an autosomal recessive disease, meaning individuals only develop symptoms if they inherit two copies of the defective FXN gene, one from their father and one from their mother. A person who has only one abnormal copy of the gene is called a carrier. A carrier will not develop the disease but could pass the gene mutation on to his or her children. If both parents are carriers, their children will have a 1 in 4 chance of having the disease and a 1 in 2 chance of inheriting one abnormal gene that they, in turn, could pass on to their children. About one in 90 Americans of European ancestry carries an abnormal FXN gene.

In 1996, an international research team identified the Friedreich's Ataxia gene on chromosome 9. The FXN gene codes for production of a protein called "Frataxin." In the normal version of the gene, a sequence of DNA (labeled “GAA”) is repeated between 7 and 22 times. In the defective FXN gene, the repeat occurs over and over again—hundreds, even up to a thousand times.

This abnormal pattern, called a triplet repeat expansion, has been implicated as the cause of several dominantly inherited diseases, but Friedreich's Ataxia is the only known recessive genetic disorder caused by the problem. Almost all people with Friedreich's Ataxia have two copies of this mutant form of FXN, but it is not found in all cases of the disease. About two percent of affected individuals have other defects in the FXN gene that are responsible for causing the disease.

The triplet repeat expansion greatly disrupts the normal production of Frataxin. Frataxin is found in the energy-producing parts of the cell called mitochondria. Research suggests that without a normal level of Frataxin, certain cells in the body (especially peripheral nerve, spinal cord, brain and heart muscle cells) cannot effectively produce energy and have been hypothesized to have a buildup of toxic byproducts leading to what is called “oxidative stress”. It also may lead to increased levels of iron in the mitochondria. When the excess iron reacts with oxygen, free radicals can be produced. Although free radicals are essential molecules in the body's metabolism, they can also destroy cells and harm the body. Research continues on this subject (see section on “What research is being done?”).

Can Friedreich's ataxia be cured or treated?

As with many degenerative diseases of the nervous system, there is currently no cure or effective treatment for Friedreich's Ataxia. However, many of the symptoms and accompanying complications can be treated to help individuals maintain optimal functioning as long as possible. Doctors can prescribe treatments for diabetes, if present; some of the heart problems can be treated with medication as well. Orthopedic problems such as foot

deformities and scoliosis can be corrected with braces or surgery. Physical therapy may prolong use of the arms and legs. Advances in understanding the genetics of Friedreich's Ataxia are leading to breakthroughs in treatment. Research has moved forward to the point where clinical trials of proposed treatments are presently occurring for Friedreich's Ataxia.

What services are useful to Friedreich's ataxia patients and their families?

Genetic testing is essential for proper clinical diagnosis, and can aid in prenatal diagnosis and determining a person’s carrier status. Genetic counselors can help explain how Friedreich's Ataxia is inherited. Psychological counseling and support groups for people with genetic diseases may also help affected individuals and their families cope with the disease.

A primary care physician can screen people for complications such as heart disease, diabetes and scoliosis, and can refer individuals to specialists such as cardiologists, physical therapists, and speech therapists to help deal with some of the other associated problems.

Support and information for families is also available through a number of private organizations. These groups can offer ways to network and communicate with others affected by Friedreich's Ataxia. They can also provide access to patient registries, clinical trials information, and other useful resources like in Pakistan Bin Adam Foundation is working on it.

What research is being done?

Within the Federal government the National Institute of Neurological Disorders and Stroke (NINDS), a component of the National Institutes of Health (NIH), has primary responsibility for sponsoring research on neurological disorders. As part of this mission, the NINDS conducts research on Friedreich's Ataxia and other forms of inherited ataxias at its facilities at the NIH and supports additional studies at medical centers throughout the United States. Several nonprofit organizations also provide substantial support research  in Pakistan Bin Adam Foundation is working on it.

Researchers are optimistic that they have begun to understand the causes of the disease, and work has begun to develop effective treatments and prevention strategies for Friedreich's Ataxia. Scientists have been able to create various models of the disease in yeast and mice which have facilitated understanding the cause of the disease and are now being used for drug discovery and the development of novel treatments.

Studies have revealed that Frataxin is an important mitochondrial protein for proper function of several organs. Yet in people with the disease, the amount of Frataxin in affected cells is severely reduced. It is believed that the loss of Frataxin makes the nervous system, heart, and pancreas particularly susceptible to damage from free radicals (produced when the excess iron reacts with oxygen). Once certain cells in these tissues are destroyed by free radicals they cannot be replaced. Nerve and muscle cells also have metabolic needs that may make them particularly vulnerable to this damage. Free radicals have been implicated in other degenerative diseases such as Parkinson's and Alzheimer's diseases.

Based upon this information, scientists and physicians have tried to reduce the levels of free radicals, also called oxidants, using treatment with “antioxidants.” Initial clinical studies in Europe suggested that antioxidants like Coenzyme Q10, Vitamin E, and Idebenone may offer individuals some limited benefit. However, recent clinical trials in the United States and Europe have not revealed effectiveness of Idebenone in people with Friedreich's Ataxia, but  more powerful modified forms of this agent and other antioxidants are in trials at this time. There is also a clinical trial to examine the efficacy of selectively removing excess iron from the mitochondria.

Scientists also are exploring ways to increase Frataxin levels through drug treatments, genetic engineering and protein delivery systems. Several compounds that are directed at increasing levels of Frataxin may be brought to clinical trials in the near future..

Armed with what they currently know about Frataxin and Friedreich's Ataxia, scientists are working to better define fraxatin’s role, clarify how defects in iron metabolism may be involved in the disease process, and explore new therapeutic approaches for therapy. 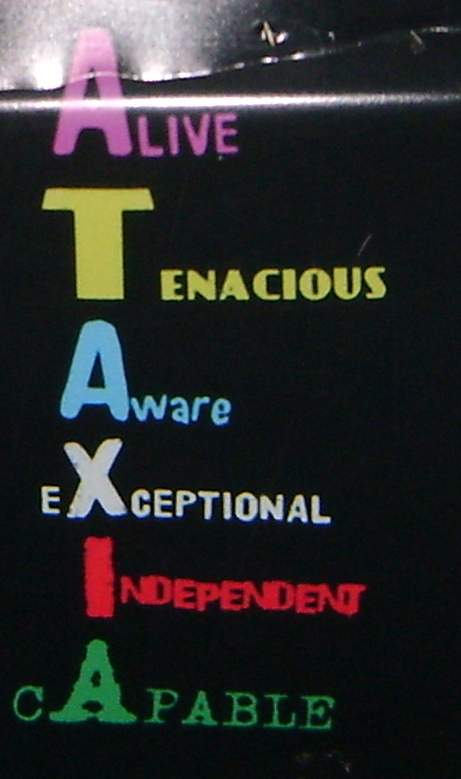 Where can I get more information?

For more information on neurological disorders or research programs, contact below:

For Free Booklet to Your Postal Address Inside of Pakistan Just E-Mail us.

Very Thankful and Special Permission from:

U.S.Department of Health and Human Services.